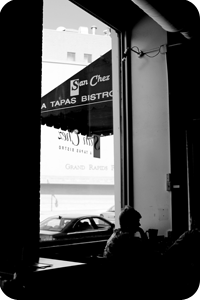 Our History: Once Upon A Tapa

In 1990, we began looking at unique concepts for a new restaurant that would include a big city feel, like nothing else in Grand Rapids at the time. So, we scouted Chicago’s most entertaining theme restaurants and discovered that tapas seemed to have everything we were looking for. It took two years of searching for the right site: an old warehouse look with brick, high ceilings and centrally located downtown.

According to culinary legend, tapas originated in Spain more than four centuries ago as "tops" for drinks made from bread, cheese, or sausage – a version of today’s "pub grub". Today, of course, tapas represent everything from hot or cold, light hors d’oeuvres to a full meal, all served in a uniquely enchanting and engaging atmosphere.

And so, on November 24, 1992, San Chez, a Tapas Bistro introduced the food and fun of Spain to West Michigan. It became an instant hit.

San Chez’ special blend of unique flavors, laid-back and communal atmosphere, and friendly, fun service made it into one of Grand Rapids’ must-go-to places - especially when entertaining those from out of town.

But San Chez did more than blaze a culinary trail through Grand Rapids. It literally blazed a redevelopment one too. The building at Commerce and Fulton that has been home to San Chez Bistro since its opening in 1992, has had a long and proud local heritage. The four-story Leonard Building was originally built by Charles H. Leonard sometime between 1883 and 1884 as a wholesale location for his furnishings, crockery, carpet and stove business. The building was sold to Dykstra Wholesale Distributing in 1951, which closed in 1985. It remained vacant until San Chez Bistro opened in 1992.

At the time, there was virtually no development south of Fulton Street, and Grand Rapids’ downtown renaissance was still in its embryonic stages.

In 2004, the space next door to San Chez Bistro, on the corner of Commerce and Fulton became available and we opened San Chez Café. In 2015, we could not seat enough people so we merged the two sides into one serving breakfast, lunch and tapas.

WE HELP THE COMMUNITY THROUGH THESE LOCAL BUSINESSES:

Today, we continue our commitment to the area’s revitalization by actively participating and supporting local businesses, organizations and area non- profits advocating the live, work, and play slogan. We believe this commitment to the Heartside Business District coupled with our commitment to lasting quality food, service, and catering has been, and will continue to be an integral part of the successful growth of San Chez Restaurants, Inc.

San Chez Bistro has been honored with numerous awards. Grand Rapids Magazine and On The Town Magazine publishers and readers alike consistently recognize our team with annual "Best of" status. We have been awarded more than 30 times in our 16-year history, including two national awards.